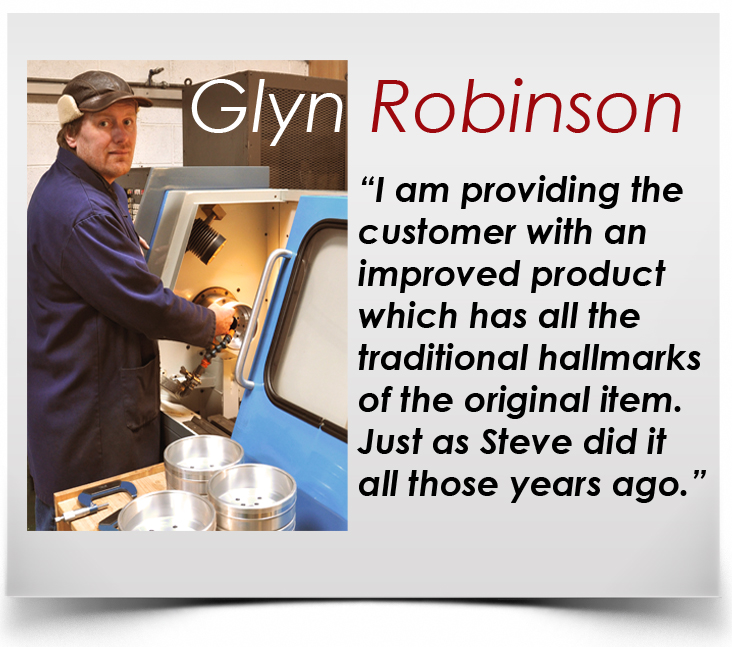 Glyn Robinson served 5 years as an apprentice Precision Engineer under the skilful guidance of David Brown Gear Industries. (David Browns being of DB Aston Martin fame.) He started his own precision engineering business at the age of 21.

When the business was firmly established, he then bought the bike that everyone drooled over at the time, a 900ss Ducati bevel. This was a road bike but it wasn’t long before things changed. After the first race it was obvious that alterations needed to be made. The exhaust pipes and kickstart shaft dug into the track on every bend.- you can only hang off so far. At the time it was deemed to be almost a criminal offence to alter or modify a Ducati. However, in the interest of finding more speed, but courting the wrath of the “ducatisti”, he took a deep breath, closed his eyes, apologised to Taglioni, and the first hacksaw cut was made. The Ducati bug had bitten him. Since that day Glyn has never looked back.

It was at this time various tuning parts were needed, and the voice of experience was needed even more so. Steve Wynne at Sports Motorcycles just over the Pennines was the obvious answer to both issues. Steve’s generous help and guidance at this point established a relationship between the two which carries on till this day. Steve and Glyn have since worked together over the years developing ideas and manufacturing various parts. Many of the fruits of their work have found their way back to the factory to be installed in the Race bikes and used on the production line.

After racing the 900SS for 2 years there was little more improvement that could be made to the standard chassis – something else was needed. In February 1987 Glyn designed and built a new Bevel powered chassis in just 6 weeks. This bike was campaigned by Bill Swallow in the 1987 Norman Hyde Classic Championship. At the end of the season Bill had not just won the cup, but had almost doubled the runners up’s points tally.

The ‘Battle of the Twins’ was the place for any Ducati special – but things were moving on. 1989 saw another bike built, affectionately called ‘Norman’ . The engine for Norman had its far distant roots in bevel cranckcases, but was virtually built from scratch. Now an eight valve, air cooled, belt driven BEAST !! Although it was never built for show, but having had the bike ready for the 1989 season of B.O.T.T, Glyn entered it for the Motorcycle News ‘Special of the year’ competition and it won. Normans minimalist, sculptured bodywork and narrow profile won many admirers, including John Britten who first saw Norman at an International Twins meeting at Assen in late 1989. John re-designed the bodywork of his own beautiful creation for the coming 1990 season. According to Glyn, and once again courting the wrath of the Ducati owners, the Britten V1000 is the most beautiful motorcycle ever made.

In 1992 a new venture into the brave new world of water cooled, eight valved, twin cam Ducatis. An 888 was bought from Steve and raced in the UK B.O.T.T. Used by Dave and Nick Jeffries, Geoff Baines and ‘Mad’ Jack Gratton (plus a few more), Glyn barely got the chance to race it and so gracefully stepped aside and retired from the saddle.

1995 and another idea. The 748SP had just come out and was eligible for the ‘600 Supersport’ national class. Another trip over the hills to Steve’s and Glyn bought a pair of new SP’s. He ran the very talented young club rider Pete Jennings. Pete won the championship.

Following the championship win, all four Japanese manufacturers offered a deal to use their bikes. A decision was made to run with Honda. The Ducatis had proved too expensive to run competitively on a private budget at this level.

The sport was changing at this time, encouraging a more professional image to attract vital sponsorship needed to run a team at this level. The team now had 2 riders, 2 mechanics, 3 helpers and a physio. Also a 40ft motorhome – oh and the fat chef, Mark Irving. Still having the precision engineering business to attend to, Glyn passed the baton over to his good friend Brent Gladwin. Over the years the team has evolved, bringing new talented riders to the scene and is still very active in UK National Superstock, The team is still run by the tireless Brent who still regularly blames Glyn for his extraordinary good fortune.

Time passes by and although the current breed of motorcycles and riders are a tremendous spectacle to watch, and be involved with, there is another equally marvellous spectacle to be had in the form of classic racing. Having been in remission for some time, but never fully cured of the Ducati bug, Glyn got involved again and, after a re-encounter with Steve Wynne, they decided to bring the Sports Motorcycles brand back to the world of Ducati – together.

The first project is the iconic TT1/TT2. As you may well know, Steve made full chassis kits for these in the eighties. All the parts are now available again but re-manufactured using up to date Cadcam and CNC machining. All this is complimented with Steve and Glyn’s combined skills and knowledge.

I am providing the customer with an improved product which has all the traditional hallmarks of the original item. Just as Steve did it all those years ago.