Whatever happened to Steve Wynne?

(Subtitled “A Letter from Heaven”)

I left the England around five years ago and came to live in Heaven (sometimes referred to as Bay of Islands, New Zealand) only to realise I hadn’t left England at all, I just discovered where someone took it in around 1960/1970. The first thing you should know about Heaven is it is a bigger land mass than UK but only four million people live here. All the roads are like the IOM TT course, and in places you can ride for two hours and not see another vehicle. One thing we were told when we arrived was the way to Auckland, turn left at the main highway, you cross one round-a-bout and go through one set of lights. The distance is similar from London to Manchester (but here the similarity ends!!) They speak English in Heaven, and drive on the left hand side of the road. The scenery is spectacular, as are the beaches.

OK, that’s the end tourism promotion, but you should all come and visit and I would be happy to help with Gabriel at the Golden Gate.

So what did happen to me? First of course I joined the Ducati Owners Club NZ and they have some great runs, down great roads, with great views as previously mentioned. The last annual Club run was in the South Island (bigger than England but with a population of only one million!) We covered 6,000 kilometers in seven days (well I did, as it was a 1,000k there and back to the start) There were around 50 bikes and 70 folk on the run, which is a good turnout considering the numbers in the Club, and it is a weeks commitment after all.

I went on my nice touring ST2, only to discover I was on the second oldest bike there, the oldest being an even older 900M. We split into about four groups. The very fast and very dangerous group (up to 300 kph, wrong side of the road, blind bends etc), the quite fast group (up to 200kph only on the wrong side if you made a mistake - I was in this bunch), the slow & safe group (up to 150kph and never on the wrong side of the road) and finally, the slow and very dangerous group (under 100kph and kept running into the back of each other and falling over in the car park) One of this lot crashed three times! And one of the first group VF&VD ended up in Hospital. Good fun all round and really great company.

I have a friend Glyn Jones, who used to work for me back in the 90’s and at the time had an MHR. He now lives in Australia and spotted one for sale in NZ. So I went and collected it for him a few days ago. It’s in excellent condition with a low mileage and I paid about £5,000, which by coincidence is what I sold Mikes original one for in 1978! 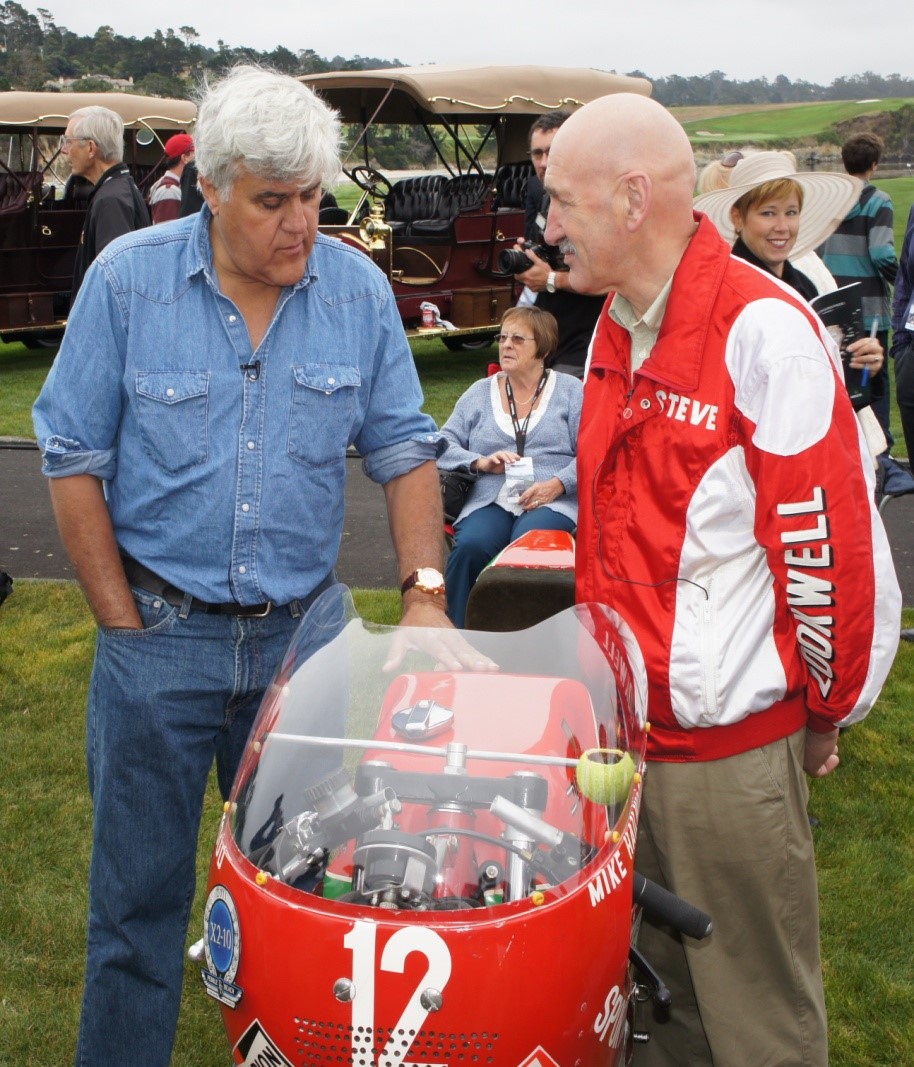 Talking of Hailwood Ducati, the man who owns the real one from time to time, has it out of the Factory Museum in Bologna, and kindly invites me to take care of it when it is run. This year it appeared at the USA Pebble Beach Concourse Event, which I have to say is normally not my thing, with massively over restored car and bikes. However to see it in real life is stunning, although it has more to do with art than motorised vehicles. The Hailwood got a great reception and the folk there were very enthusiastic and pleased to see the bike. I did a TV interview with Jay Leno who I had thought was a somewhat shallow TV personality. He turned out to be anything but! In fact, he is an enthusiastic presenter and very knowledgeable on cars and bikes, and he has bought (and still rides) a MHR. If you would like to see it then do an internet search using Google and look for “Jay Leno Garage”. On this website search for “Ducati” and you will see the pages which were posted back on September 2011.

When I used to be the “Real Steve Wynne” and ran a real Sports Motorcycles, my main effort in the 90’s was producing F1 & F2 Pantah based racing and road bikes with a variety of frames, from an improved Verlichi Ducati type, to alloy single side s/arm for the 888 engine. Ducati factory got a bit miffed that this bloke in England was producing more Ducati race bikes than they were, and even got a road version out before them. The solution was on the lines of Poacher turns Gamekeeper, and they offered me the import franchise provided I gave up my Ducati bike production. This I did, and enjoyed the years with them still running my own race team, notably giving Foggarty his first WSB win, followed by Ron Haslam, Nick Jefferies, and my favourite Robert Holden (who as a Kiwi introduced me to NZ) With these riders we went on to win another TT, Ulster and NW200.

When I decided to retire to NZ (social degradation, Iraqi war, over crowding, not to mention the bloody weather!) I wondered what to do with Sports Motorcycles? I had some offers to buy the company but it seemed such a part of me having started it when I was 19 back in 1964 (now you can work out how old I am) so like a old drum brake, I decided it was best to just let it fade away.

But not so fast! My friend who used to do all the high tech engineering & machining for me, Glyn Robinson of Gleave Engineering (mate of Jamie Whittam and Tosland), came to NZ for a visit. We were talking of how, now a few years have passed, the little old bikes I used to make are real collectors’ items, and also how difficult and expensive it is to get parts for the old Ducatis.

Glyn liked Heaven so much, he has decided to move over here as well, so welcome the return of Sports Motorcycles, with Glyn doing all the work and me suggesting impossible engineering tasks to perform, which is something he excels at. Modesty should forbid me to say (but won’t) that many of my ideas (turned into metal parts by Glyn) were incorporated into the factory Ducati Race bikes, and then into the production bikes.

We are up and running so take a look at www.sportsvalve.com and let us know what you think? And if you know of any impossible to find parts you would like making, let us know.

Kindest regards to all you Ducati folk,